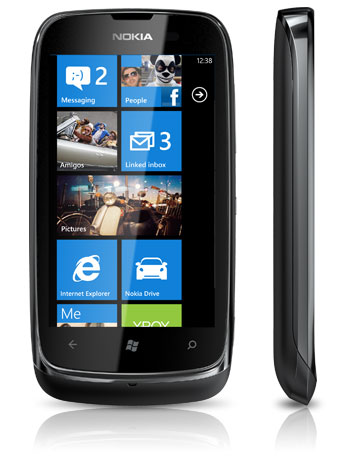 Nokia has announced that it will bring Windows Phone in more affordable price back in MWC, that’s why the had launched Lumia 610, a low budget Windows Phone, which is launched by Nokia in India today.

As Microsoft has introduced Windows Phone Tango update which has lowered the hardware requirements for Windows Phone including RAM, which was earlier 512 MB but after Tango its 256 MB.

Lumia 610 is powered by Qualcomm 800MHz processor and Adreno 200 GPU, has 256 MB RAM, and 8GB of Internal memory.It has a 3.7-inch display with a resolution of 800×480 pixels. It has a rear camera of 5 MP but I wont support HD video recording, it also misses front camera too.

It has a nice battery of 1300 mAh which can last you for 10 Hrs of talk time, for connectivity it supports 2g, 3G, WiFi, Bluetooth, GPS and USB.

It comes with Windows Phone 7.5 OS, it will get an update of 7.8 soon, as like other WP7 phone it wont get any WP8 update. It do comes with some interesting apps like Nokia Music, which allows you to download DRM free 45 Lakhs songs, Nokia Mix Radio and so on.

This phone is available in market from 7 July 2013 for Rs.12,999, Nokia has tried to target Android segment by introducing this Lumia 610.