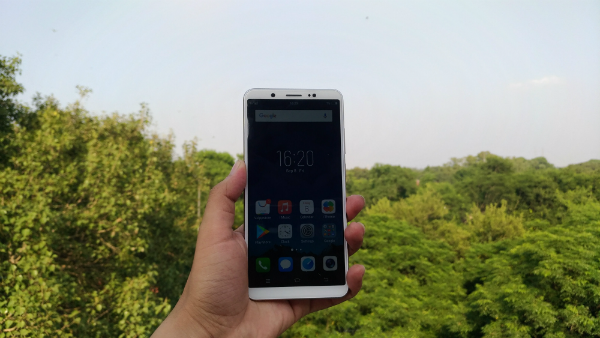 As told earlier, the main USP of this smartphone is its 24MP front facing camera which is an update from 20MP from its predecessor Vivo V5. This front facing camera comes with lots of modes and highly popular Beauty Mode is also upgraded here to Beauty Mode 7.0 which now works more perfectly and enhance skin tone more naturally.

You can also capture images or videos in portrait mode using the front facing camera which allows you to blur the background and keep the subject in main focus. AT back you have a 16MP rear facing camera with faster autofocus and f/2.0 aperture, this device can capture 1080p videos with both front and rear snappers.

Another highlight of this smartphone is its display, it flaunts a 5.99-inch Full-View 18:9 aspect ratio display (720×1440 pixels), it is very similar to what we have seen on LG G6, but here company ha just stretched the length of the device but essentially it’s a 720p display only. However, at first look display looks stunning and brilliant.

In terms of looks, it comes with full metal unibody design which makes this device more premium, edges are rounded which makes the grip on this device easier and better, there is a finger print scanner at the rear and it is easier to reach.

When it comes to rest of the specs, the Vivo V7+ is powered by Snapdragon 450 octa-core processor clocked at 1.8GHz, it is a new entry-level chipset from Qualcomm which is the successor of Snapdragon 435, Snapdragon 450 runs on higher frequency as compared with its predecessor but will offer almost same performance.

Must Read – Vivo V7 Plus; Features, Specifications, and Price

It has 4GB RAM and 64GB onboard storage which can be further expandable via a dedicated memory card slot. Like any other Vivo flagship smartphone, Vivo V7+ also comes with a dedicated HiFi audio chipset, AK4376A which improves your audio experience over both headphone and speakers.

When it comes to connectivity, it supports Dual SIM, LTE, VoLTE, WiFi, Bluetooth, GPS, and Micro USB. When it comes to software front, it runs on Android 7.1 Nougat wrapped under FunTouch OS 3.2.