As expected, today Samsung has launched flagship device for business class people, the Samsung Galaxy Note 5 which company has launched couple of weeks back globally, and just like Galaxy Note Edge Plus, this time as well Samsung didnt made us wait any longer and they launched device in very short span of time here in India. Two variants of Samsung Galaxy Note 5 are launched in India, the 32GB and the 64GB variant at the price tag of Rs 53,900 and Rs 59,900 respectively and sale will go on from 20 September. 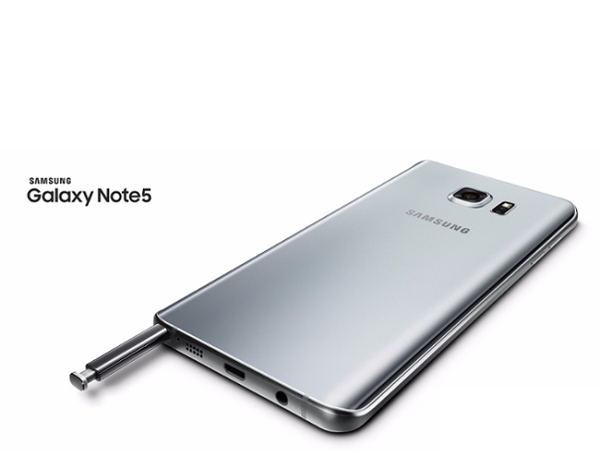 One of the USP of Samsung Galaxy Note series is its S-Pen, with every version Samsung use to improve this and here as well company has did the same, Samsung has improved its S-Pen and for the first time company has added push-to-eject mechanism, which makes it much easier for you to eject the stylus.

S-Pen is longer and comes with improved the pressure sensitivity and writing performance as compared with earlier versions, there are tons of new features like you can pull out S-Pen out and start writing on screen which makes easier to take quick note. Samsung has redesigned the Air Command menu, and you will get shortcuts to the Action Memo, Smart select, Screen Write, S Note, and Settings.

When it comes to specs, Samsung Galaxy Note 5 comes flaunts the same 5.7 inch Super AMOLED display which we have seen on Note 3 and Note 4, it seems Samsung has settled with this screen and it also seems to be most appropriate screen size for company, it has got QHD (2560×1440 pixels) with pixel density of with 518ppi, Samsung has bumped its RAM and now it has got 4GB of RAM and comes in 32GB or 64GB variant, no SD card here as well.

For photography, here’s again the same which we have seen on Samsung Galaxy S6, it comes with 16MP rear camera with LED flash, f/1.9 aperture and optical image stabilization and at front you will find an 5-megapixel selfie, snapper.

Samsung has reduced the battery from last year variant and now it has 3000mAh battery, but now it supports both wireless and fast charging, for connectivity it supports single-SIM support, 4G LTE support, Wi-Fi 802.11 a/b/g/n/ac, Bluetooth 4.2, NFC and USB 2.0, and when it comes to software, it runs on Android 5.1.1 Lollipop out-of-the box, wrapped under a refreshed TouchWiz UI.