Last night LG has launched LG has finally took the wrap off from its latest flagship device, the LG G4, however there was no need from LG to announce any feature of this device as all specs and features of this are already known, thanks to all leaks which were floating over internet from a long period of time. As soon as this phone was launched, one major question comes up, do LG G4 worth upgrade or not. If you are having a LG G3 and wants to upgrade then here is a comparison of both device which will help you to make decision. 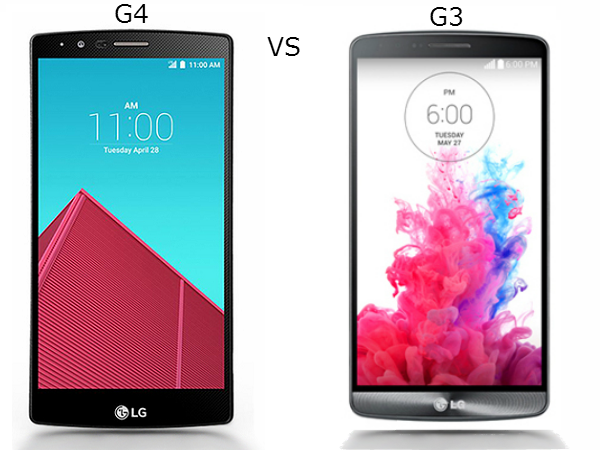 In terms of design, both LG G4 and LG G3 looks quite similar to each other, LG G4 follows the same design language which we have seen in its predecessor. LG G4 is more square and has sharper edges. LG G4 has slightly curve screen as well which provide good viewing angles.

When you turn your device backside you will find big difference, G4 comes with leather back panel which gives more premium look to the device and also provide better grip. Placement of buttons remains the same. Leather plat at back surely make this device stand out in crowd.

Both device comes with 5.5 inch QHD display screen with screen resolution of 1440 x 2560 pixels, means you will get 538 ppi pixel density, but here Lg has gone a step further and where LG G3 has a True HD IPS+ LCD screen, LG G4 comes with new technology called an IPS Quantum display.

Its quite strange for us as LG has selected hex-core Snapdragon 808 instead of octa-core Snapdragon 810 which we have seen in HTC M9. In simple way you can say that LG G4 is more smoother and fast as compared with LG G3.

LG G3 runs on Android 4.4 Kikat wrapped under Optimus UI which can be upgraded to Android 5 Lollipop, while Lg G4 comes with a new interface, the UX 4.0 which is based on Android 5 Lollipop and here LG is more and more focusing on its home made apps and on Google Apps as well. At launch company has said that they have decided to eliminate as bloatware as they can.

LG has made big improvement in terms of camera and improved both hardware and software to deliver high quality images, where LG G3 has an 13MP rear camera with laser autofocus, optical image stabilization, dual-LED (dual tone) flash, with f/2.4 aperture.

On LG G4 you have an 16 MP, with laser autofocus, optical image stabilization, dual-LED (dual tone) flash and  f/1.8 aperture. Which means if LG has correctly implemented software then you will get stunning images out of it.

Front camera has been also improved from 2.1MP to 8MP, for better selfies and now it can cover wider area as well.

Its like a trend for LG to deliver 3000mAh battery on most of its high end devices, LG G3 featured 3000mAh battery so LG G4 has, which means it comes with same raw battery which we have seen in last year variant, but at launch event LG has said that LG G4 battery can deliver 20 percent more life than its predecessor.