LG is all set to launch its latest flagship smartphone, the LG G5 on February 21 at upcoming Mobile World Congress 2016 aka MWC, and just ahead of its launch, company has started teasing about the phone. The company has posted an image on its social media channel which shows an Always On Display on this upcoming smartphone with a caption of “Never go asleep while others do. LG G5, Always ON.”, which is very similar to what we had seen on LG V10. 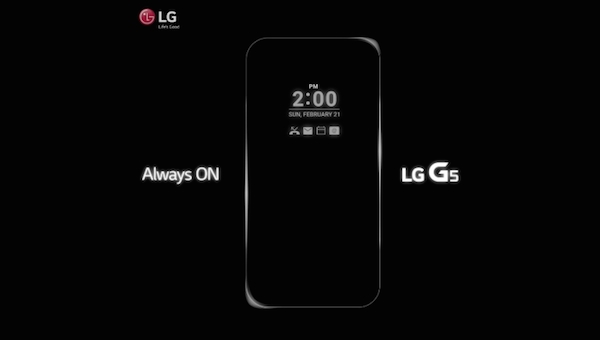 This teaser shows that this always on display will show your basic notifications like missed calls, messages, time and date on the black and white screen, which means users will be able to see basic notifications on locked screen without the need of unlocking it.

This is something which we had seen earlier on Moto X, Motorola has introduced this feature on its Moto X 2013 variant, even some Nokia phones came with Glance Notifications.

As of now what we know about this device is that it could flaunt a 5.6-inch QHD (2560×1440 pixels) display, under the hood it will be powered Qualcomm’s latest Snapdragon 820 SoC along with 3GB of RAM.

When it comes to photographic frnt, it might feature a dual-camera setup at back with dual-LED flash and a laser auto-focus, at front you will have an 8-megapixel front-facing selfie camera, will houses a 2,800mAh batery, will have fingerprint scanners,  underneath the rear camera module, and on the software front, Android 6.0 Marshmallow wrapped under LG’s custom UI on top of it.